Thinking about feeding your baby

When you’re pregnant, it’s good to think about how you want to feed your baby once they're born.

For some mums there are many things to consider, like your cultural beliefs, personal circumstances, and your own physical and mental wellbeing.

Talk to your partner, family/whānau, and your midwife or maternity carer about it, and have a plan so they know how they can help you

Most baby formula is made from cow’s milk modified to make it suitable for babies. But it’s not the same as cow’s milk.

Why babies need formula rather than cow’s milk

Here’s why you shouldn’t give cow’s milk to your baby as a main drink until they’re over 12 months old:

Babies under 12 months old shouldn’t have:

Which baby formula is best?

The formula aisle at the supermarket can be quite overwhelming, and it can be hard to know which will work best for your baby.

In New Zealand, the manufacturing of infant formula is governed by Food Standards Australia and New Zealand (FSANZ). There are strict regulations, and all formula for sale in New Zealand will be good quality, with all the nutrients your baby needs.

Here’s some information about the kinds of formula you can buy.

All cow’s milk-based infant formula brands sold here have a similar nutritional proﬁle and are suitable for most babies. The fact one brand is more expensive, or your hospital uses it, doesn’t necessarily make it better than any other.

Casein and whey are the proteins in breast milk, and cow’s milk formula has the same proteins. Cow’s milk formula is usually labelled as either casein-dominant or whey-dominant, meaning the formula either has more casein or more whey. Whey is the watery part of the milk and is more easily and quickly digested than casein, the lumpy part of the milk.

The percentage of whey and casein in cows-milk formula are noted on formula labels.

If your child isn’t reacting well to cow’s milk-based formula and you suspect an allergy, it’s best to seek advice from a health care professional. They’ll be able to advise you on alternatives.

Beta casein is more easily digested than alpha casein, but whey is still the most easily-digested protein.

The casein/whey ratio will be outlined on the goat’s milk formula tin.

Soy-based formulas use soya bean as a source of protein, offering a vegetarian alternative to milk. Soy is naturally lactose-free. Some guidelines on the management of allergy to cow’s milk protein don’t recommend soy as the ﬁrst choice alternative to cow’s milk formula for babies under six months of age. Again, if you suspect an allergy, seek professional advice from a health care professional.

How to prepare baby formula

Carefully read the directions on the formula tin. Different formulas have different-sized scoops and you make them up in different ways. Make sure you check the use-by date, which you can find on the base of the formula can. If you have formula that’s past its use-by date, throw it out. 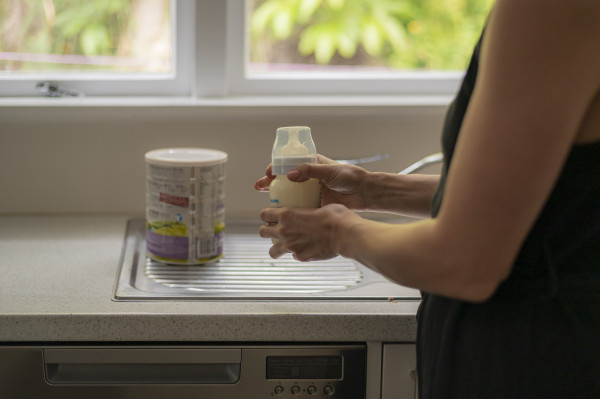 Writing the date you opened the formula on the lid of the tin may be helpful. Any opened tins of formula should be thrown away after one month.

It’s fine to serve formula cold if your baby doesn’t mind it, but many prefer their milk warmed to at least room temperature.

The safest way to warm formula is to stand the bottle in a bowl of warm water, or you can use a bottle warmer with a thermostat control if that better works for you. Just be careful not to leave the bottle in the warmer for more than 10 minutes. Harmful bacteria can grow in prepared formula.

After warming, gently swirl the bottle to mix the formula, and test the temperature by putting a few drops on your wrist. It should feel just warm.

If it’s too hot, cool it down by putting it in a bowl of cold water or by running it under the cold tap.

Microwaving bottles is not recommended because the uneven heating of the milk can burn your baby’s mouth.

Using formula when you’re out and about

Measure the right amount of cooled, boiled water for one feed into a cleaned and sterilised bottle and place the cap on tightly. Put the right amount of formula powder into a cleaned and sterilised container. It might be a good idea to bring an extra bottle of water and enough extra powder (in a second container), just in case.

It’s safest to only add the formula powder to the water only when your baby needs a feed.

How much do formula-fed babies drink?

There’s no set number of feeds your baby should have in a day. All babies are different, and they each drink different amounts at each feed. Just feed them whenever they’re hungry.

Formula tins provide a guide on how much formula infants need for their age, but it’s only a guide and might not suit your baby.

An adequate fluid intake by infants will result in six or more very wet nappies a day. In older infants and toddlers, clear or light-coloured urine indicates a sufficient fluid intake.

Recommended fluid intakes (as recommended by the Ministry of Health)

For infants from birth to six months of age the Average Intake is 700 mL per day of total fluid (met by cue feeding with breast milk or formula).

Note that the fluid intake for new born infants does not start at 700 mL from birth. Colostrum and then the breast milk supply build up gradually from birth.

For infants aged seven to 12 months, the Average Intake is 800 mL per day of total fluids. This comprises 600 mL (about 2½ cups) per day of fluids (breast milk, formula and water) with the remaining 200 mL coming from complementary foods.

For toddlers aged one to two years, the Average Intake of total fluids is 1400 mL per day, of which 1000 mL per day (four cups) is from fluids (breast milk, formula and water) with the remaining 400 mL coming from complementary foods.

Recommended sources of fluid in the diet

The recommended sources of fluid for infants and toddlers are:

Fluids other than breast milk fed from the breast can be given by a cup or bottle and teat. Cows’ milk as part of a varied diet is an important source of nutrients for children from one year of age. For some vegetarians, vegans and/or others who avoid cows’ milk, there are suitable alternatives to cows’ milk.

Some babies need more than the ‘required amount’ for their age and size, and others never drink that much. As long as your baby is active, has plenty of wet nappies, and is gaining weight over time, all is well.

Caring for your child

Whether you choose to feed expressed breastmilk or formula, bottle-feeding babies can be a great bonding experience for parents, caregivers, family and whānau.