Why sleep is important

We’ve all experienced sleepless nights and have felt first-hand the effects of not getting enough sleep. And as a parent you know how fussy and cranky a child can be when they’re tired, and how sweet and happy they can be after a good rest.

Babies and children need sleep not only to restore them physically, but also for:

There’s growing evidence poor quality sleep – or not enough sleep – can have a negative impact on children’s health and wellbeing, weight, behaviour, and learning.

How much sleep children need every day

The information in the table below is just a guide. It shows the recommended total hours of sleep (including naps) every day for children from birth to five years. Some children sleep slightly less or more than the recommended time, and that may be appropriate for them.

Adapted from the National Sleep Foundation: How much sleep do we really need?

The biological process that controls our feelings of being sleepy or awake over a 24-hour period is called the circadian rhythm, or body clock. It’s controlled by an area of the brain that responds to light, which is why most of us are most alert during daylight hours, and are ready to sleep when it’s dark outside.

Babies aren’t born with a circadian rhythm, and they don’t know that people sleep at night. Normally within the first three-four months they begin to organise sleeping and waking according to daily cycles of light and darkness. 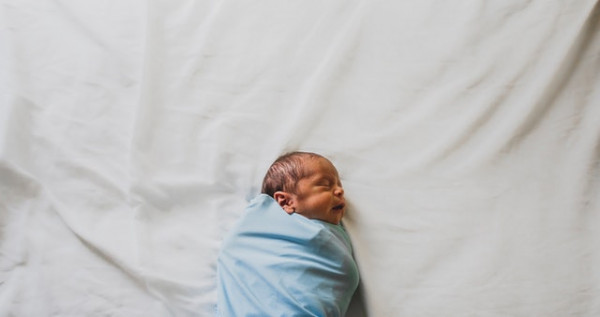 Elements of a sleep cycle

From about six months of age, we all cycle between different types of sleep during night time sleep and long naps - rapid eye movement (REM) sleep, and non-REM sleep.

In REM sleep, also called dream sleep, your eyeballs move from side to side underneath your eyelids. Babies can spend up to half of their sleep in the REM stage, compared to only about 20% for adults.

Non-REM sleep consists of light sleep and deep sleep. Children wake easily in light sleep, and it’s difficult to wake them from deep sleep. In the deep stages of non-REM sleep, the body builds bone and muscle, repairs and regrows tissue, and strengthens the immune system.

The amount of REM and non-REM sleep in a cycle changes through the night.

In the first few hours after children fall asleep, they have a lot of deep non-REM sleep, and sleep very soundly.

In the second half of the night, they have more REM and light non-REM sleep, meaning they don't sleep as soundly. They may wake up more during this time.

Whoever came up with the phrase "sleep like a baby" clearly didn’t know much about young babies!

Caring for your child