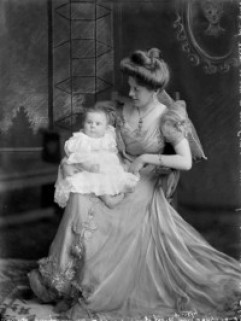 Lady Victoria Plunket was more than just the patron and celebrity face  of the organisation that took her name – she was also a mother of eight who became a staunch advocate for the health of women and children.

Born into a wealthy and aristocratic family, her father had been the Governor-General of Canada and Viceroy of India. Queen Victoria was her Godmother.

Victoria met Frederic Truby King in 1905 and was fascinated with his work to “help the mothers and save the babies.” Shortly after King started the Society for the Promotion of the Health of Women and Children, Lord and Lady Plunket offered their patronage to the organisation, and she became heavily involved in promoting its work.

It was Lady Plunket’s idea to create a professional nursing service for mothers and babies, with nurses trained at Karitāne. These ‘Lady Plunket nurses’ promoted healthy food, good hygiene, fresh air and especially breastfeeding for babies.

Five months pregnant, Lady Plunket travelled the country talking about the welfare and feeding of babies, rallying support for Dr King’s vision and methods, and encouraging that a branch be formed in each location. With her help, the organisation quickly grew.

“Up to now mothers have been left to untangle for themselves the great difficulty of rearing their babies, and over and over again little ones have had to suffer through want of knowledge as to the best food to give them under their changing circumstances… All mothers, rich and poor, should have the benefit and supervision of a woman who is specially trained and fully qualified to help mothers.” – Lady Plunket, 1908 speech

By the time Lord and Lady Plunket returned to England in 1910, nine Plunket centres had been established around New Zealand. It was Victoria’s suggestion to link the branches of the Society together in one organization based in Dunedin, and for them to have an annual conference.

At this first annual conference the name of the organisation was changed to the Society for the Health of Women and Children.

In 1914, it officially became the Plunket Society, in recognition of one of the women who had rallied support for Truby King and a nursing service specifically for mothers and their babies.